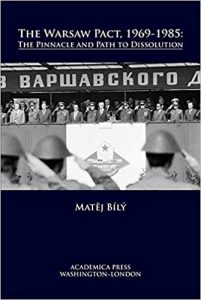 In The Warsaw Pact, 1969-1985: The Pinnacle and Path to Dissolution, young Czech scholar Matěj Bílý analyzes the internal tensions of the Soviet-led Cold War alliance as its careened toward its end. Starting with the peak of the alliance’s power under Soviet leader Leonid Brezhnev, the book follows its ossification to its increasing haplessness under Brezhnev’s successors Yuri Andropov and Konstantin Chernenko. Rooted in detailed research in Czech, Polish, and German archives, this book presents much previously unknown information about the alliance’s mechanisms as it served as one of the Kremlin’s increasingly ineffective tools for managing the Eastern Bloc.
Bílý’s findings prove that the Warsaw Pact never became an initiator of political processes within the Soviet sphere of interest and only reactively addressed military issues. The alliance’s framework did not allow it to become an incubator or agent of any independent development in the Soviet sphere of influence. To the contrary, events within the Warsaw Pact reflected the overall dismal situation in the Eastern Bloc and the changing policy of the Kremlin toward its East European satellites. Because of the alliance’s lack of flexibility and cumbersome internal mechanisms, it was unable to react to the dynamic challenges of the 1980s and helplessly followed a path to its own end.