Ústav pro studium totalitních režimů Exhibitions Prague Through the Lens of the Secret Police Exhibition of Photographs from the Workshop of the Czechoslovak Communist Secret Police Launches U.S. Tour

Exhibition of Photographs from the Workshop of the Czechoslovak Communist Secret Police Launches U.S. Tour 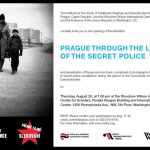 – The Czech institutions centered on the expert disclosure of the totalitarian mechanisms of Central European Communist regimes – the Institute for the Study of Totalitarian Regimes and the Security Services Archive – have organized the unique exhibition, “Prague Through the Lens of the Secret Police,” and released its companion eponymous English-Czech publication. The exhibition introduces the visual outcome of the activities of a special unit of the Communist secret police (StB) – the Surveillance Directorate of the Ministry of the Interior – which performed important tasks in the surveillance of persons considered enemies or objectionable to the Communist regime. The secret police servicemen succeeded in capturing on film not only “subjects of interest,” but also the likeness of Prague in the 1970s and 1980s. The exhibition and book’s American premiere symbolically took place on August 20, the eve of the 41st anniversary of the occupation of Czechoslovakia by Warsaw Pact troops at Washington, DC’s Woodrow Wilson International Center for Scholars, organized in cooperation with the Embassy of the Czech Republic. The European premiere took place in Brussels in April of this year, within the scope of the Czech presidency of the EU Council. One of the the exhibition’s aims is to show those who themselves never lived through a totalitarian regime how the Communist secret police, which helped keep the regime in power for over 40 years, functioned. “Taking into account that interest in the photographs and exhibition has been expressed even by independent media in countries in which a strict dictatorship currently reigns, we see this project as carrying a specific type of message, illustrating which practices totalitarian systems made and make use of in order to maintain power. We hope that the exhibition, also to be on view in New York, Boston and other U.S. cities, contributes to a change in viewpoint in a country in which there is still unfortunately no democracy,” stated Institute for the Study of Totalitarian Regimes Director Pavel Žáček.