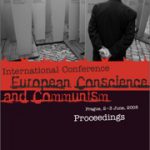 The international conference European Conscience and Communism, held on June 2-3, 2008, was organized by the Committee on Education, Science, Culture, Human Rights and Petitions of the Senate, Parliament of the Czech Republic; its organizers were Martin Mejstřík, Senator, and Jana Hybášková, Member of the European Parliament. During the course of the conference, Institute for the Study of Totalitarian Regimes Director, Pavel Žáček, and First Deputy Director, Miroslav Lehký, both made presentations, the texts of which are included in the attached proceedings. The Prague Declaration on European Conscience and Communism was adopted by the participants of the conference on June 3, 2008.